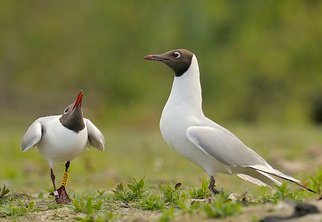 In an attempt to answer questions about movement and breeding ecology of BHGull, a colourring-project was set up in 2009 in Molsbroek Nature reserve (Lokeren, East Flanders province, Belgium). In 2010 the project extended with breeding colonies in Lommel (Limburg province, Belgium), Ghent (East Flanders province) and around the port of Antwerp (East Flanders and Antwerp provinces, Belgium). In 2011 the project started too in Het Vinne Nature reserve (Zoutleeuw, Flemish Brabant province), in 2012 in Marais d'Harchies (Hensies, Hainaut province-Wallonia) and in 2015 in Veurne (West Flanders Province).

The focus mainly is on juvenile birds. Survival, site fidelity and exchange between colonies will be followed up. The gulls are ringed with a yellow colourring with black inscription on the left tarsus and a scientific metal ring on the right leg.

The used codes on the colourring are:

From the breeding season 2017 on, we also use a

Sightings of colourringed BHGulls should be reported to Tim Audenaert